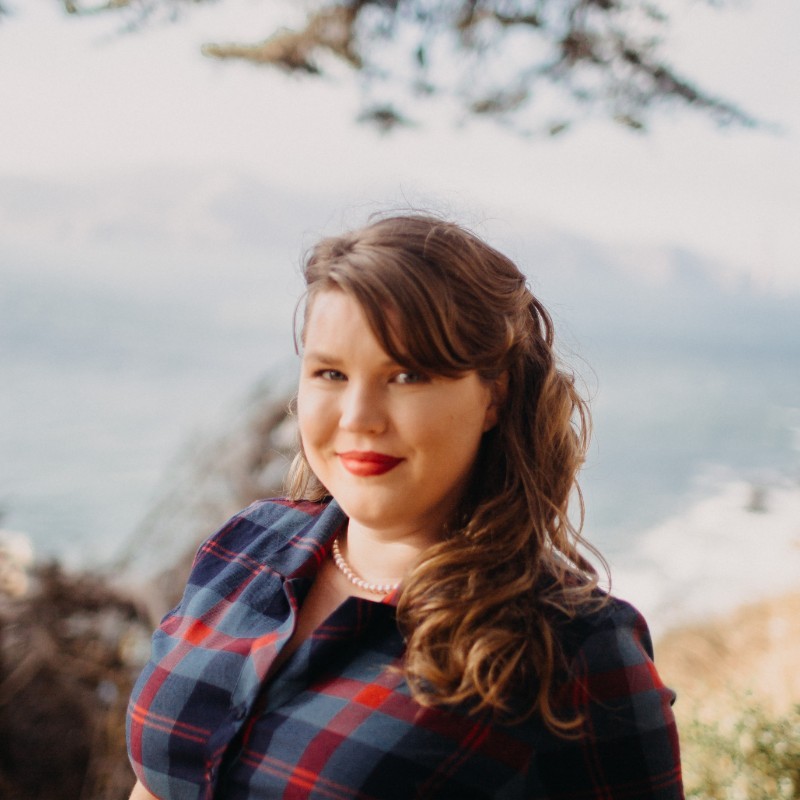 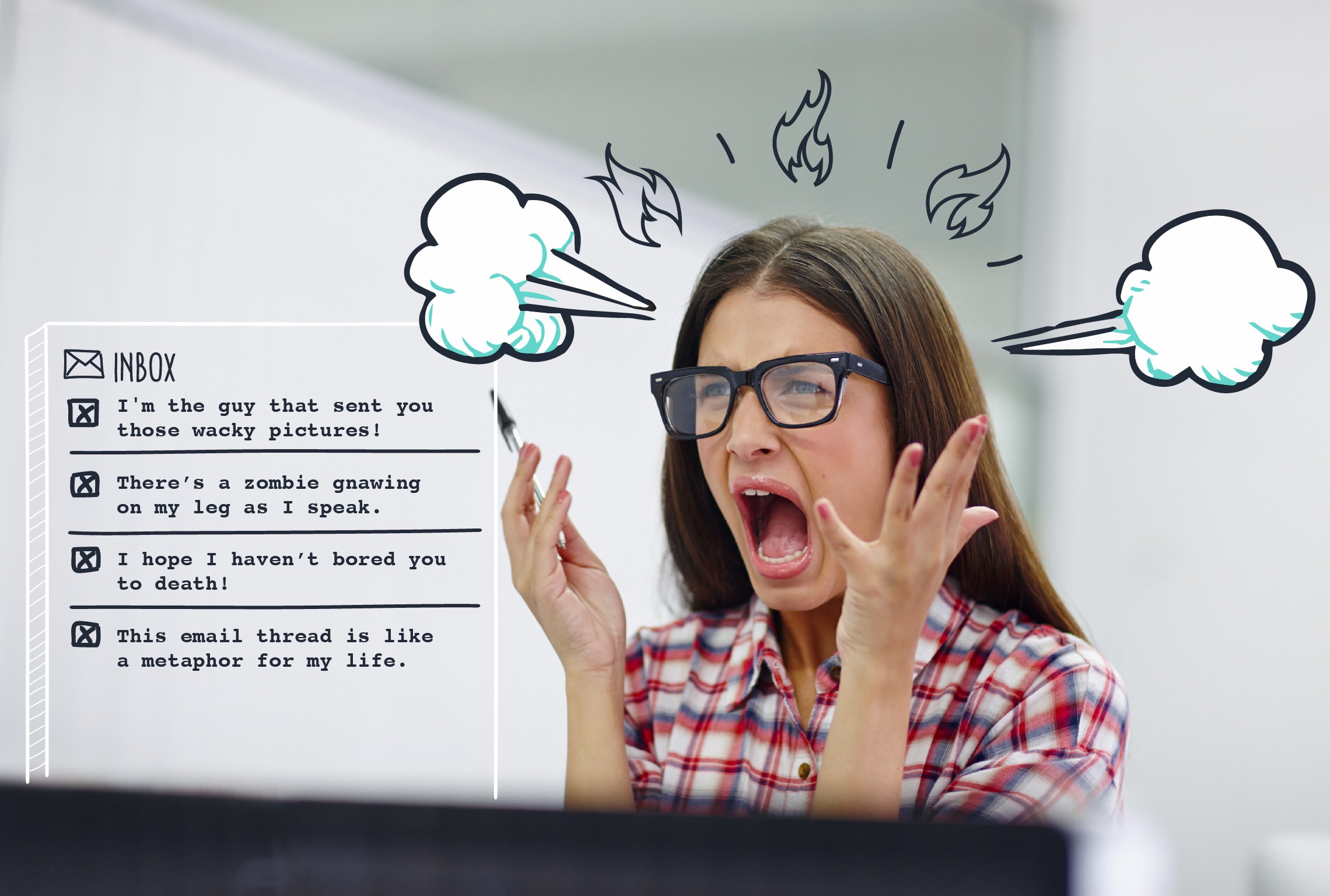 Every morning I get into the office and open my email, where I am immediately greeted by roughly 283 unopened messages, 95% of which are cold emails from salespeople.

As the day goes on, more salespeople dump more cold emails into my inbox. And like clockwork, I delete nearly all of them—most of those without even reading them. The ones I do read tend to be exactly what I expected: a salesperson who didn’t really do their research and shouldn’t be reaching out to me.

Sometimes the emails are too long, sometimes they’re too short. Sometimes I have no idea what they’re about or what action the sender wants me to take. Sometimes I’m pretty sure the sender doesn’t even know who I am. On a very rare occasion, I come across a cold email that I actually read, find useful, and respond to. And sometimes (less rarely), I am actually surprised by the sheer awfulness of the email.

Over the years, I’ve had some stupendously bad cold emails invade my inbox. In fact, sharing the worst of the worst has become something of an office sport among my colleagues. And now, I’ve decided to compile a cold email Hall of Shame so that we can all learn from past mistakes and get better at this critical form of sales communication.

Now, before we start with the list, let’s lay out what a good cold email should do so that we’re all on the same page.

A good cold email should:

That said, here’s a link if you need to study more best practices.

Without further ado, let’s get into the reason we’re all here: the worst, most cringe-worthy cold emails of all time.

To prevent eye-strain, click any of the emails to see full-size versions, and please note that I have blacked out all personal information for the protection of both the senders and receivers of these emails.

My colleague received this email from someone we hope is a well-intentioned though misguided sales rep, but who actually comes off as a potential stalker targeting female office workers. 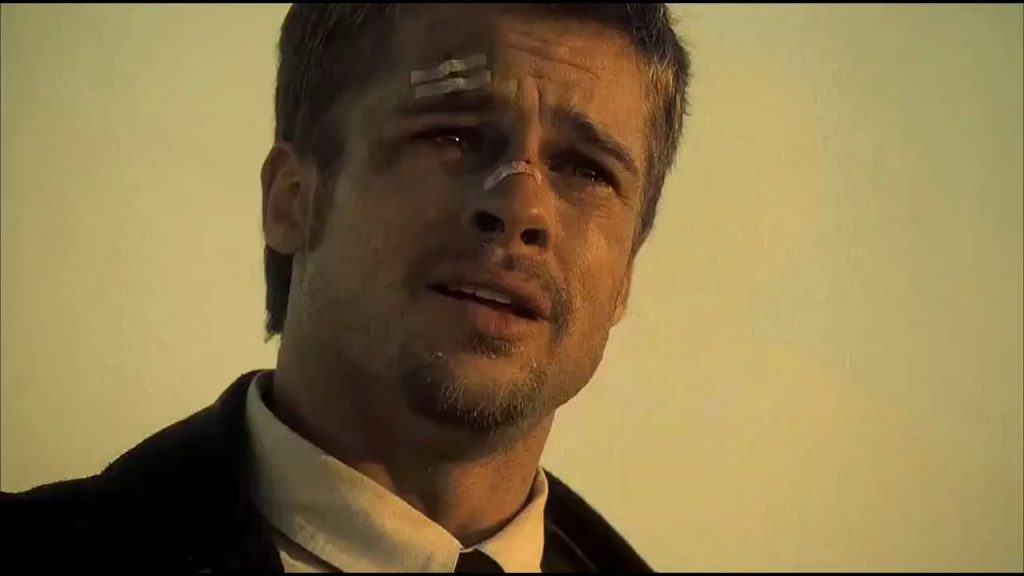 The best sales email is the one that gets read.

Download the Complete Guide to Writing MUCH Better Sales Emails for over 50+ pro tips on how to make your emails stand out in a crowded inbox. 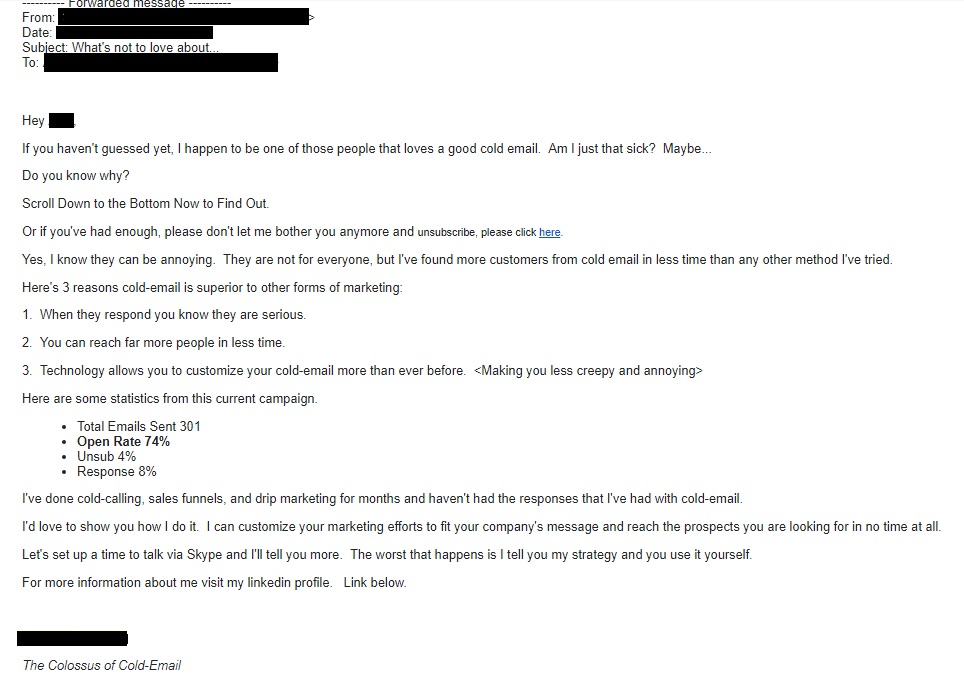 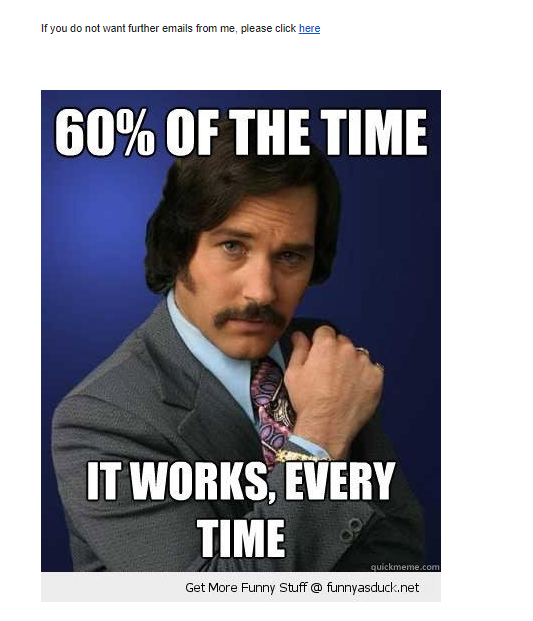 You should probably make sure that you are sending flawless cold emails before you start calling yourself “The Colossus of Cold Email,” otherwise you might end up on this list.

This sender went on to send my colleague at least three more cold emails, each somehow worse than the first. One email is more or less just a meme with no CTA. I’ll go ahead and share some of my favorites below. Behold the terrible punctuation, sad formatting, and multiple cat memes. Or as the Colossus himself would put it, “Scroll Down for a Rad Experience!!!” 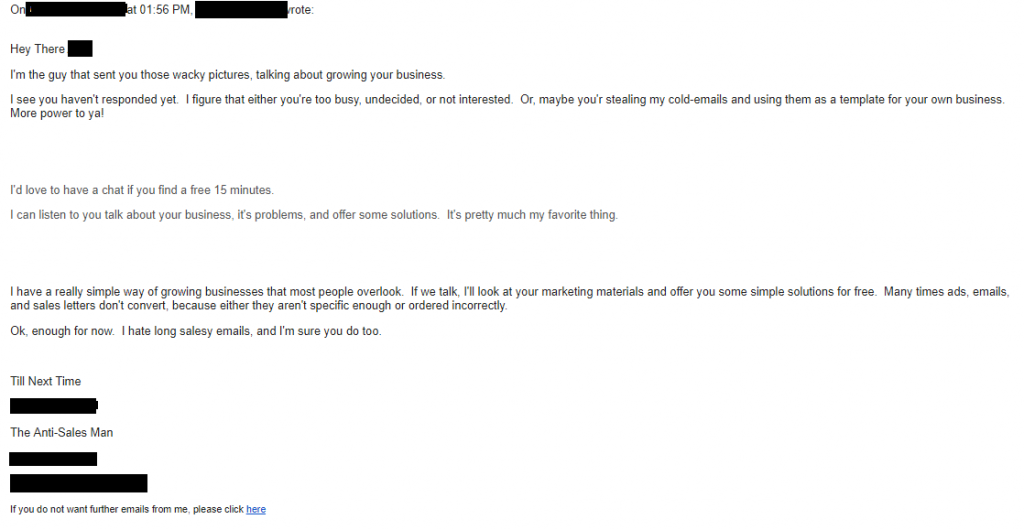 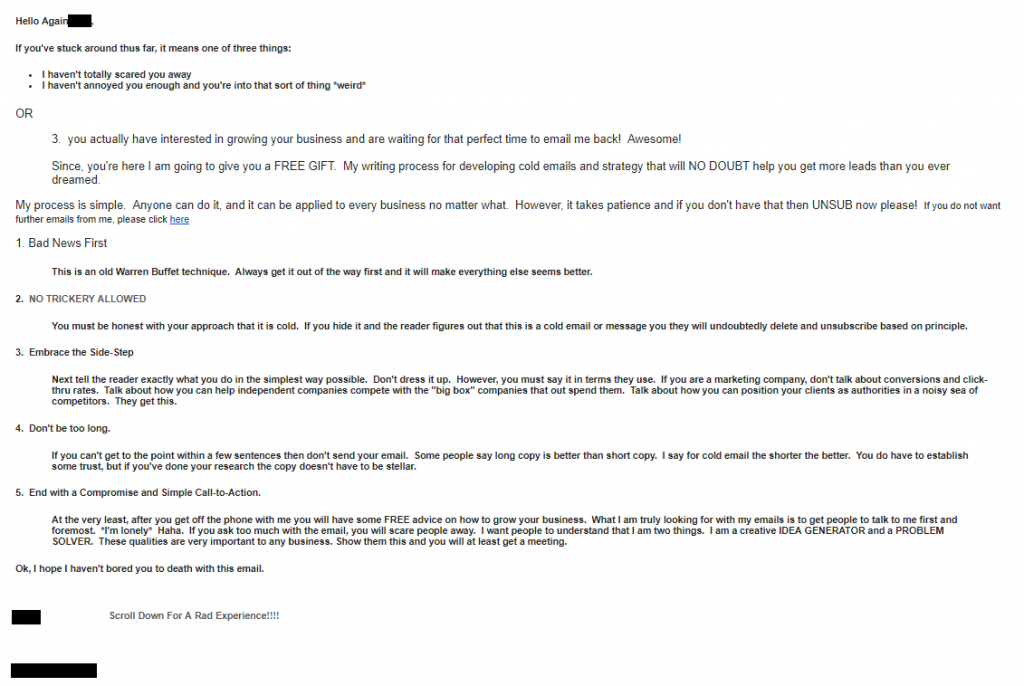 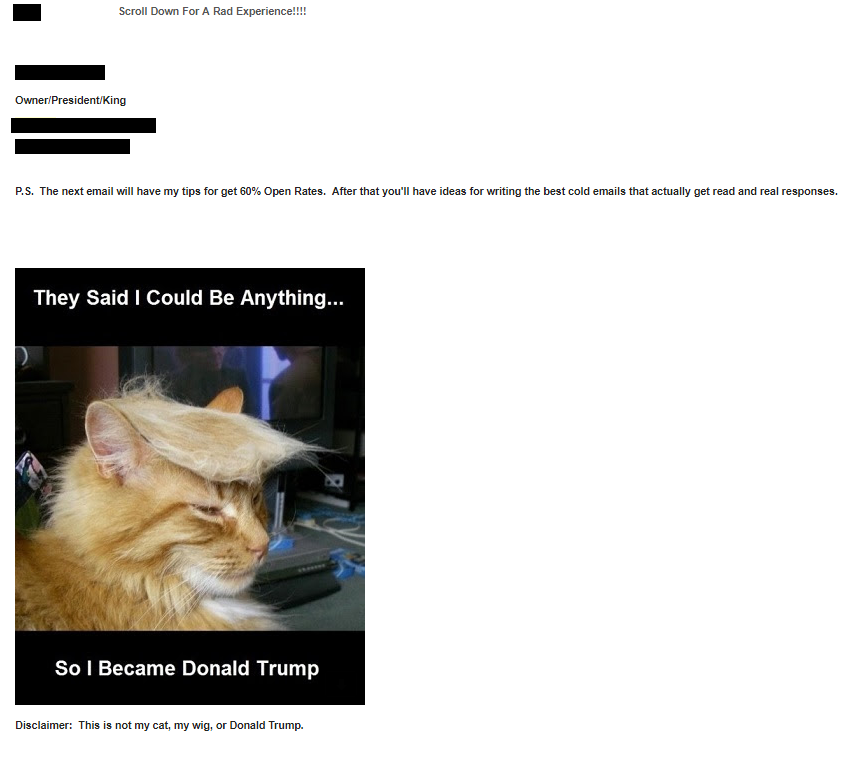 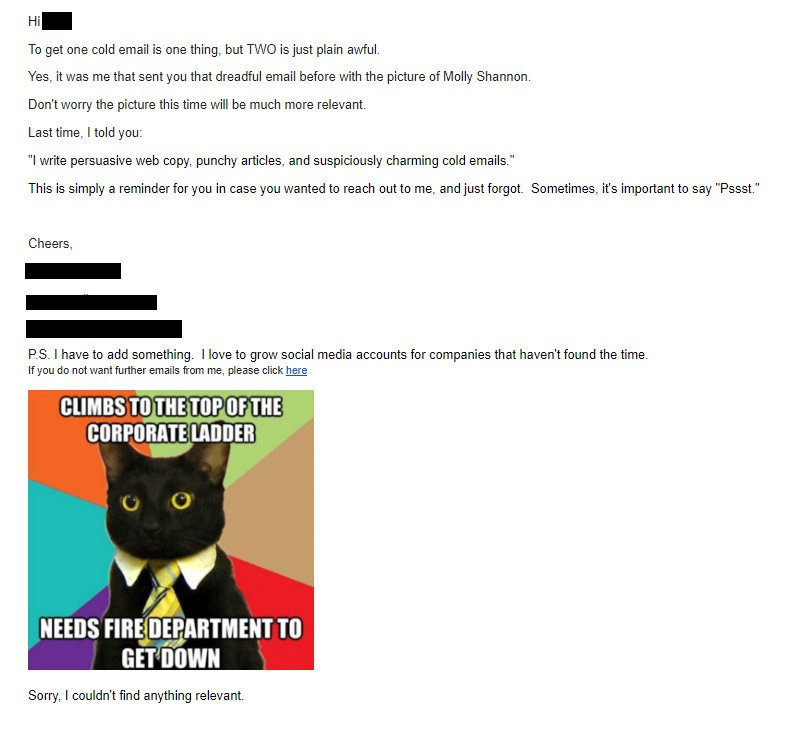 My colleague recently received this charmer apparently sent during a Walking Dead episode. 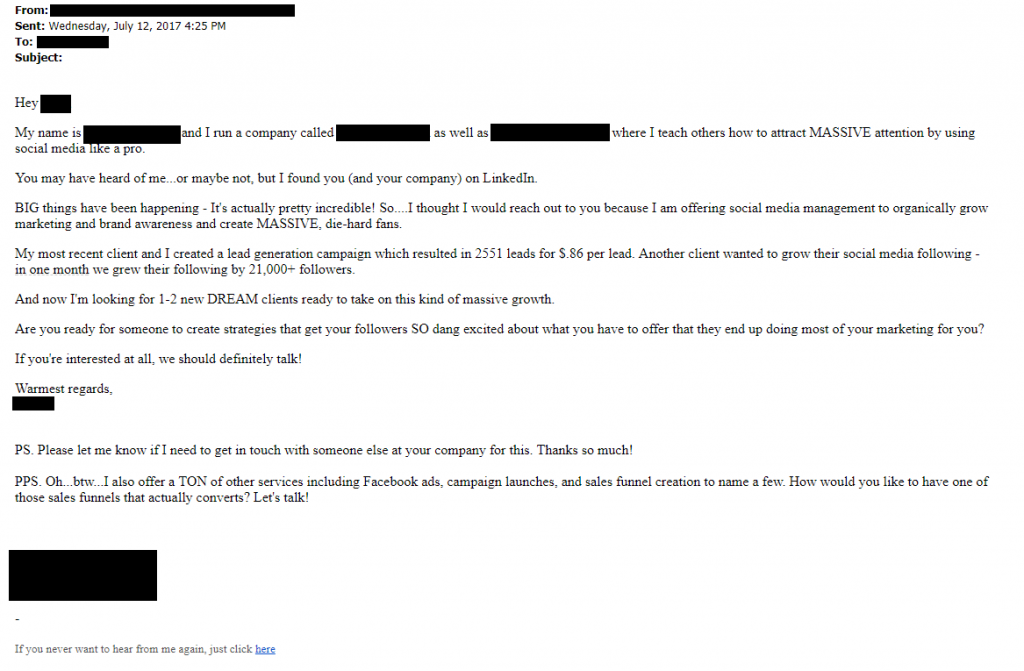 This email is actually one in a series of emails (all of which I will share with you), and is so bad that a friend of mine from a different company independently forwarded this same email to me without knowing that I was already including it from my own inbox.

Anyhow, enjoy a few more terrible emails from Raquel, including one that contains the phrase “I lied,” which is always comforting to hear from salespeople. 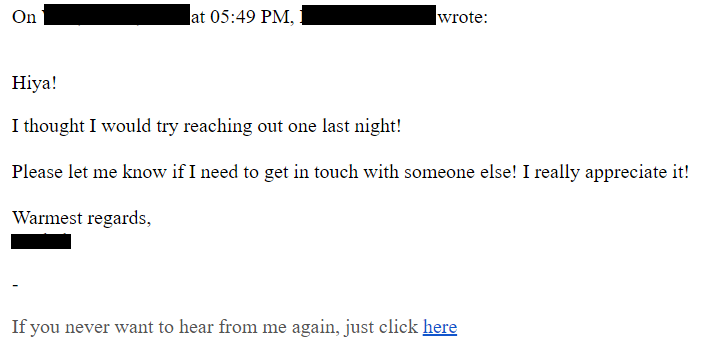 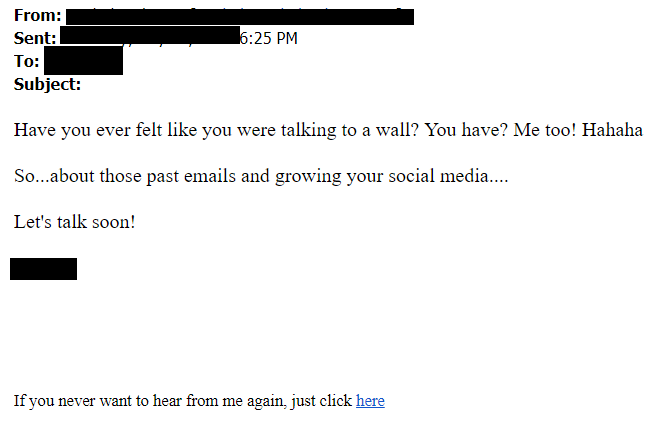 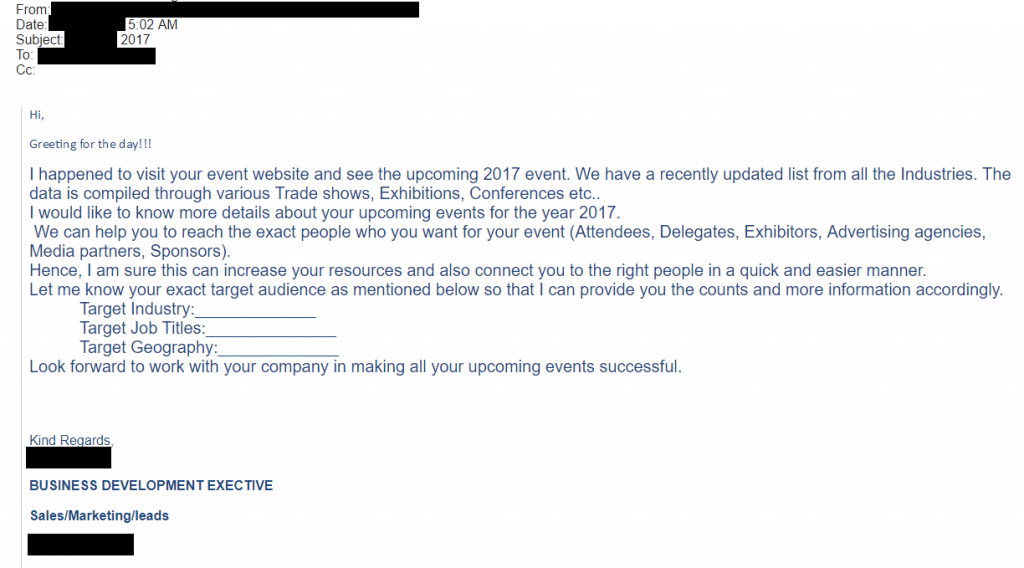 My colleague forwarded this to me, mentioning that he felt bad for sending this to me because it’s clearly from someone whose second language is English, but he just had to pass it along because he received two of these at the same time from two different people. I don’t feel bad for including this email on this list, though, for a number of reasons.

All of these cold emails are truly dreadful. To avoid joining their ranks, be sure that you’re sending out simple emails with clear CTAs, and that you’re doing your research on prospects before contacting them. Sales is a numbers game, sure, but it’s first and foremost a quality game.

Bonus #1: Lowlights from the Nutshell inboxes

I asked the Nutshell team if they had any terrible cold emails to share for this article, and they had some doozies. Here are a couple of my favorites, presented with their anonymous commentary.

“After a couple of bland, forgettable contact attempts—work on that subject line, buddy—the sender of these emails began to unravel before my eyes.”

“If the point of these emails was to make me feel bad for him, then mission accomplished. Unfortunately, I still have no interest in doing business with him or his company. Self-deprecating humor for the loss, actually.”

(For goodness sakes, man, pull yourself together.)

“This one totally infuriated me. First off, the guy tricked me into opening his email by invoking our CEO’s name in the subject line. (That ‘What time on Tuesday works best?’ line was also annoyingly presumptuous, considering we had never connected before and he didn’t know my availability.) And when I didn’t reply to him, he basically threatened to tell on me to my boss.”

“I considered writing back with, ‘I would never work with you in a million years, a**hole,’ but I’m going to be the bigger person and just ignore him forever.”

Bonus #2: The Worst Newsletter of All Time

This was forwarded to me by a colleague, and I couldn’t help but include it on this list. 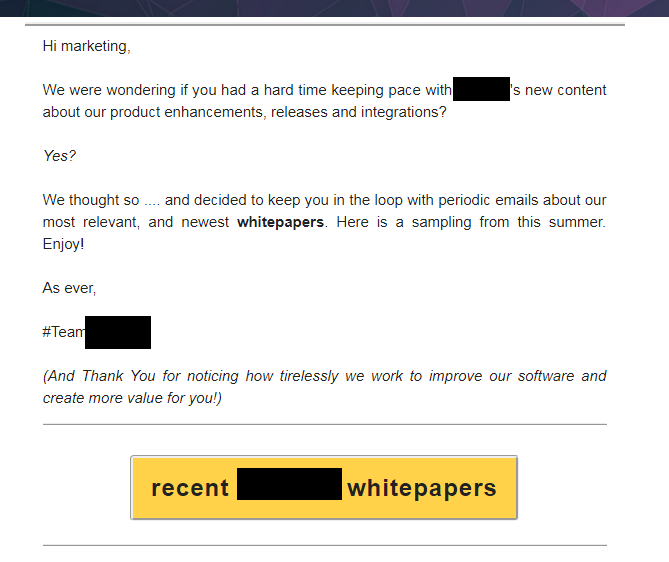 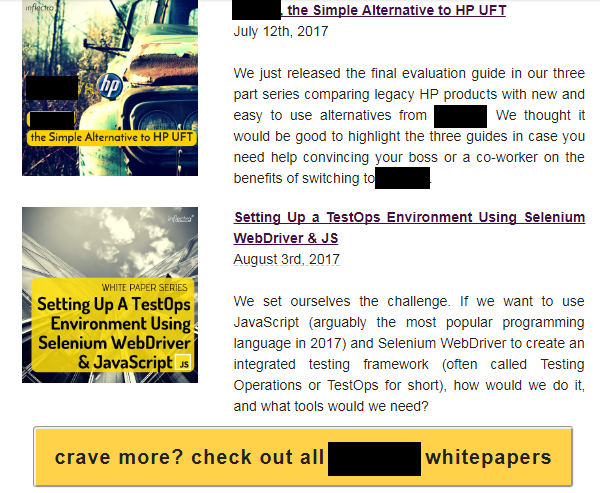 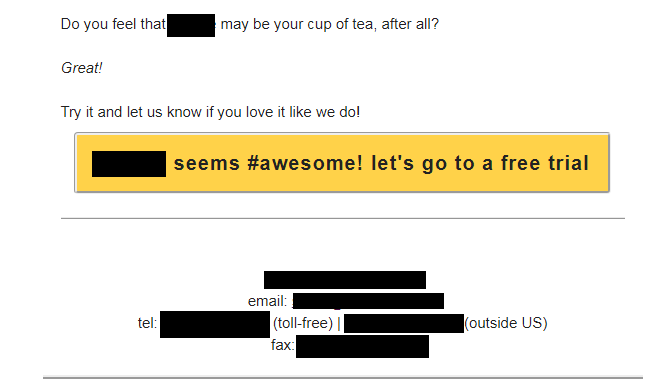 My colleague did a fabulous job laying out the problems himself, so I’ll let him take it from here:

“I’ve never had a newsletter make me visibly shake before, but there’s a first time for everything.”

Got any horrible cold emails rotting in your inbox? Forward the worst one to bgoldstein@nutshell.com. Your anonymity will be guaranteed.

Learn the email tactics that B2B sales pros use to hook their customers.

Getting over the rainbow: How to authentically acknowledge LGBTQ+ experiences during Pride month

4 tips on differentiating from your competition