Destroy your silos: Why ‘conscious collaboration’ is the key to sales success 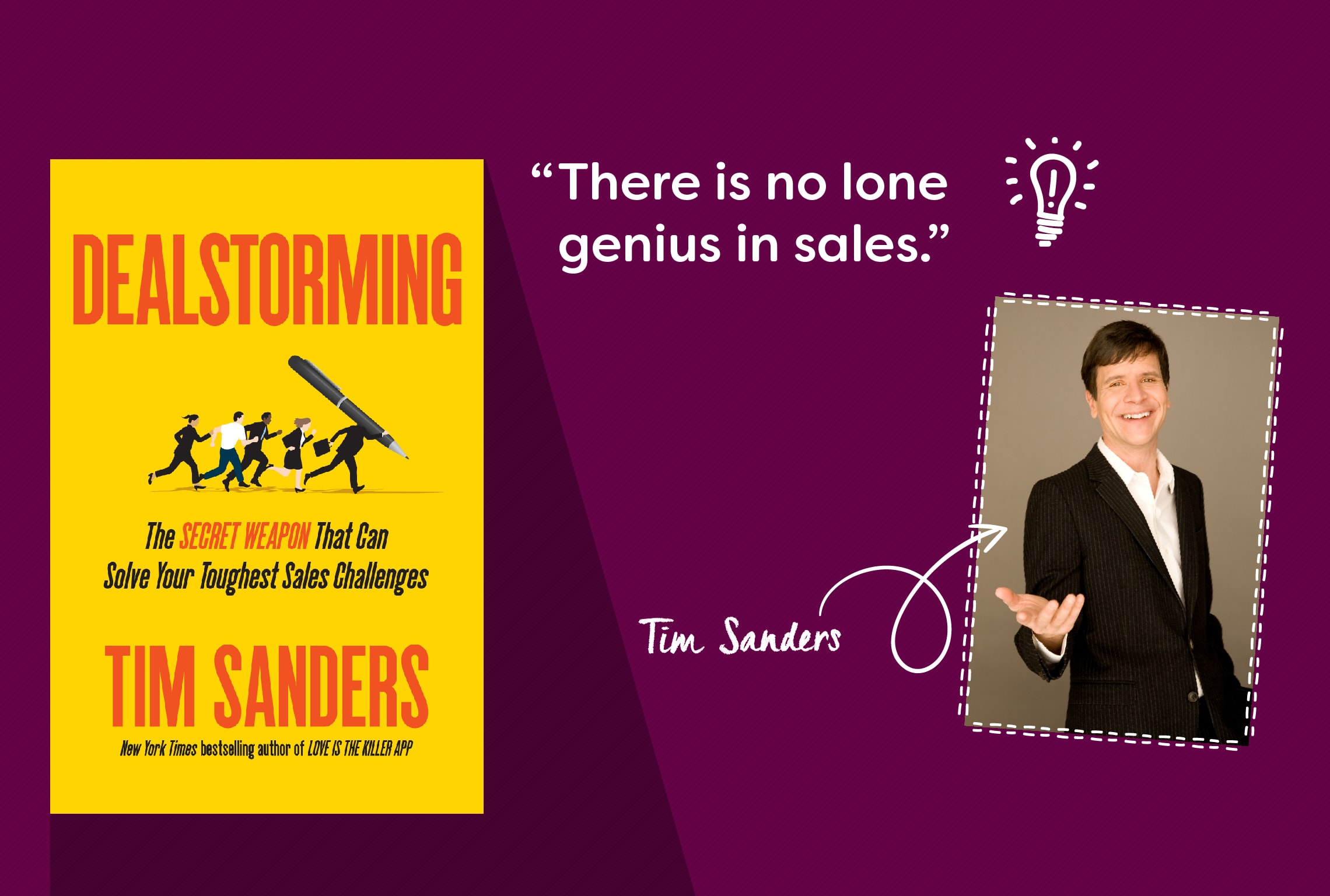 This article is excerpted from Dealstorming: The Secret Weapon That Can Solve Your Toughest Sales Challenges by Tim Sanders (@sanderssays). Visit http://dealstorming.net to get your copy and receive access to Tim’s Dealstorming-meeting video training series.

There is no lone genius in sales.

No individual account executive or sales manager makes the big deal or saves the strategic account on his own. Lone genius isn’t the difference maker in closing complex sales. The source of true innovation is teamwork. [Tweet this] As creativity researcher Keith Sawyer writes, “Collaborative webs are more important than creative people.”

Let that sink in for a second: groups of regular folk working together as a team trump innovative thinkers. Wow. If you’re a sales leader, this should change your mental model for recruiting. In this complicated selling environment, you should stop focusing on hiring “top producers” and, instead, search out and acquire team players with the tendency to spin up webs to capture sales opportunities.

There’s another reason this loner superstar myth needs to vanish from sales culture: we need to proactively pursue sales collaboration and not look at it as a last resort option when best individual efforts aren’t enough. Through his work with companies and organizations, David Burkus came to the same conclusion: “If we believe that innovation is a solo effort, then we’re more likely to remove ourselves from the networks we need.” When it comes to problem solving, your network truly is your net worth.

Genius is in the process that creates a remarkable work, enabled by a collection of people working together. It starts with a commitment to solve a problem, an observation that leads to an idea, improvements to the idea, and then, of course, relentless execution. A single person cannot complete this process. It takes a team.

If you think your sales department is already working as a team, I have a question for you: Is it a tall team or a wide team? This is an important distinction and yet another fallacy of thought in sales leadership circles.

When your team is vertically organized to include sales leaders, managers, reps, enablement, account management, and sales training, that’s not a collaborative web—that’s a silo. It’s a collection of people steeped in sales-think, which is usually pretty insular. The sales silo sees other groups around the company as either service providers or “the land of no.”

Yup, I said it: sales builds silos, often hardened to protect them from the outside world. In fact, according to several prominent CEOs I’ve talked to, sales is as bad at building silos as product groups or brand teams. One reason for this self-selective insulation is that many account executives find it difficult to give up any level of control over the selling because they fear that collaborating with other departments could lead to them having an equal say in what can be sold, and how. Further, many in the sales department believe they know the customer better than anyone else in the company because they talk to the customer every day.

However, your dealstorming team will not be complete unless you create a wide team to diversify the mix and, most important, cover up any holes or blind spots that can lead to an easy win for the competition. Think of it this way: If your football team consisted of a quarterback, three running backs, six wide receivers, and two tight ends, who would block? Who would play defense? Who would kick off or attempt field goals? You’d field an offense-only football team.

You will struggle to solve your sales challenges if you are concentrated on the sales side of the ball in building your dealstorming team. A bunch of people in the sales world will think, well, like salespeople. You’ll lack key insights that affect the value of what you sell, how profitable it will be, how it will resonate through the prospect company, and, most important, whether you can actually deliver on what you sell.

To actually get the benefits of the dealstorming team, you must create a wide team, that breaks down organizational boundaries and ensnares unlikely players, such as cross-country engineering groups or customer champions. The wider your team is, the stronger the collaborative web becomes. [Tweet this]

Problem solving is a team sport

Aerospace and transportation company Bombardier responds to deals “stuck in the pipeline” by employing what it refers to as peer consulting cohorts. According to CEB’s Jessica Williams, this group of managers, from across various business units, “push each other’s thinking and develop approaches to real-world business problems.” This combination has led to a competitive advantage in multiplayer bid situations in which billions of dollars are on the line for those who weave the right approach.

Like Bombardier, when a B2B sales culture embraces the team sport of problem solving, companies usually become winners in their market, or “world-class performers,” according to a 2014 study by research group Miller Heiman. World-class sales performers are defined as companies that outperform their rivals by an average of 20% across key metrics such as new account acquisition or average account billing over a protracted period of time. When Miller Heiman analyzed what separated these companies from the pack, “conscious collaboration” emerged as the decisive factor.

World-class sales performers were twice as likely to collaborate across departments to pursue big deals. One key point of collaboration for enterprise deals was between sales and marketing. In this case, the world-class organizations were almost three times more likely to align the two groups than their rivals. When it came to retaining strategic accounts, the habit held, as the world-class organizations were twice as likely to manage them with interdepartmental teams and sales department members.

These top-performing companies didn’t team up for the sake of teamwork. “The purpose of collaboration is not collaboration itself. It is achieving better results in a shorter amount of time,” said Miller Heiman research director Tamara Schenk. “It allows individuals with disparate areas of expertise and different roles to work together . . . to multiply their individual contributions.”

One of your most important leadership missions is to overcome the bias against cross-departmental collaboration. It’s the only way you can become a world-class selling organization. With the dealstorming process I detail in this book, you can build a wide web but still maintain ownership of the process. To quote a Navy Seals mantra: Individuals play the game, but teams beat the odds. [Tweet this]

A beginner’s guide to link building