What should you do when you don’t believe in what you’re selling? 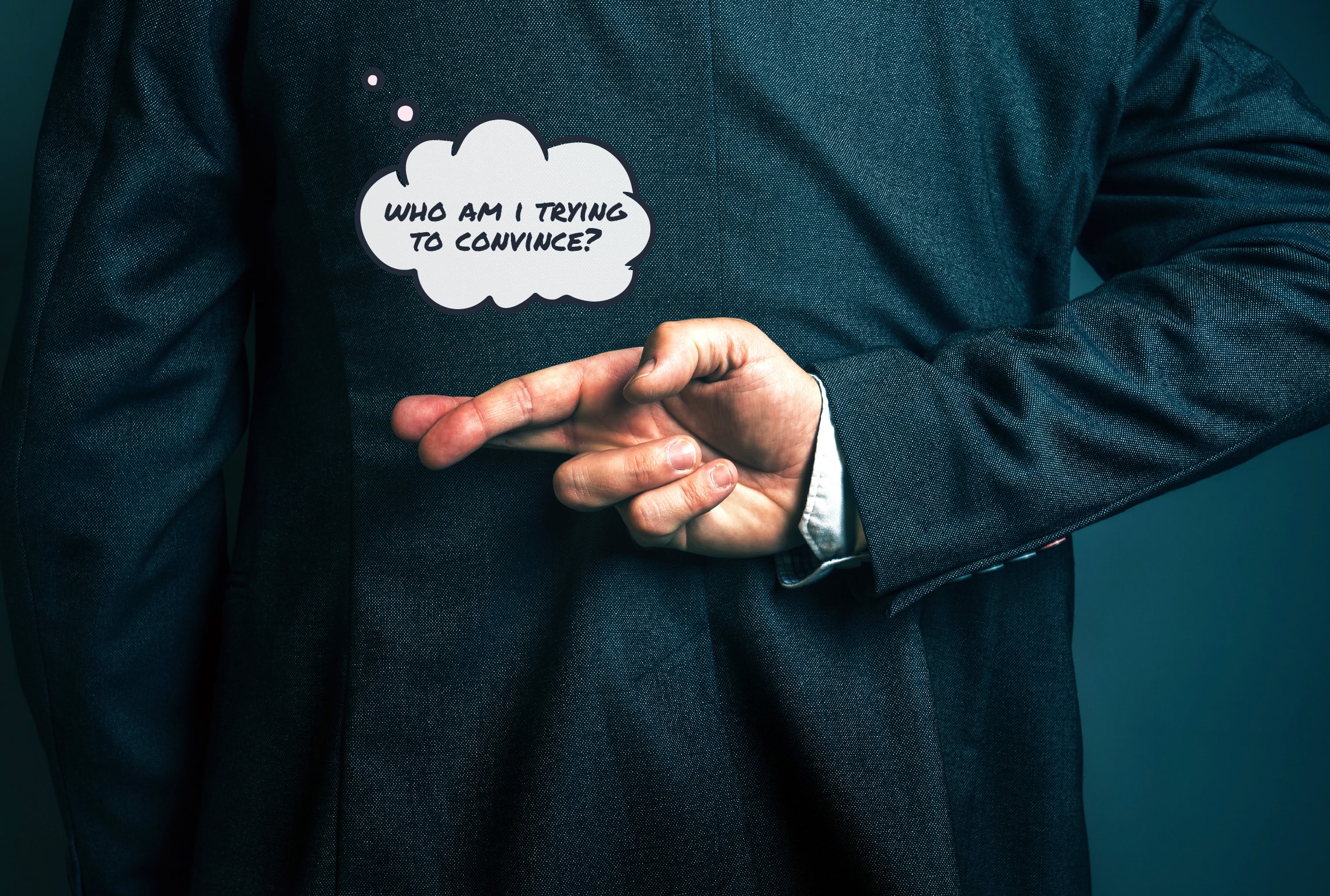 Three bites in and we couldn’t believe how good this place was.

Ah, pizza. Not just any pizza though. Phenomenal pizza. We left the restaurant in a food coma and the next day told everyone we knew about our experience.

Selling is easy when you believe in your heart that you’re persuading someone to make the right decision. In my case, selling this pizza place was a no brainer. The product was great, the service was fantastic, and I believed it was worth the schlep to the middle of nowhere New Jersey to get a slice.

The question is what to do when you’re not sold on what you’re selling.

What to Do When the Line Is Blurry

What happens when, to use my pizza analogy, you’re tasked with selling the “good but not great” pizza place when there’s a far superior slice being served at the pizza restaurant down the road?

This is the grey zone where the line gets blurry, and it can wreak havoc on your sales effectiveness if you’re not careful. Here are three things you can do to sell well, ethically, and effectively when the line is blurry.

(1) Find a different angle besides features and benefits

Odds are, if you’re feeling like your product isn’t “the best” it’s because you’re comparing apples to apples, when you should be comparing apples to ice cream. Maybe your software isn’t the best at integrating with a payment processing system your customers use. So stop measuring it in terms of that feature and focus on something else.

For example, maybe your founder started this company because of a sense of social responsibility and ethical practices, so she provides all employees with paid family leave, treats customers with respect and dignity, and started a scholarship fund for STEM education.

If you can’t sell the “best features” angle, you could sell the founder’s vision. Depending on the prospect, you can connect with their love of their family, their own experiences as an employee, or whatever other emotional hook you can find. Remember, we sell to the heart, not to the head—so speak to your customer’s emotions.

(2) Focus on what the prospect needs, not what you think about the product or service

Traditionally, we’re taught to sell by focusing on how great our product, service, or company is compared to our competitors. We highlight features and benefits. But if you’re having trouble connecting to how great those things are, a different approach works better. I call it the “Problem/Solution Framework.”

You focus on your prospect and whatever problem they have at that exact moment, and then ask yourself: Will my product or service solve that problem?

If your prospective customer’s problem is, “It’s 8:45 PM and I’m starving!” then it doesn’t matter if you don’t have the best pizza in the city. It matters that you have a table available and your food comes out quickly.

Focus on the aspects of your product or service that solve your customer’s problem. Even if you don’t believe it’s the best pizza in town, your customer might.

Since the economy has evolved from caveat emptor to caveat venditor, it works to your advantage to be transparently honest. It’s a buyer’s market. And in a buyer’s market it takes two seconds of Googling to be found out.

Your goal as a salesperson is to build trust.

When you’re dishonest, or if your prospect can sense there is something dishonest happening, you destroy that trust.

Dishonesty in this case doesn’t simply mean making a false claim. It also means lying by omission. If your prospect knows, for example, that your competitor’s payment processing is better than yours, pretending that’s not true won’t help you sell it.

What will help you is being honest about your imperfections. Show that you (or the product) are fallible, but that you’re working on it. This type of transparency increases your credibility in the eyes of your prospect. When you act with integrity—even (or especially) when it’s not in your own best interest—you engender trust.

Customers buy for emotional reasons and justify the sale with rational reasons. So, if they trust you, like you, and believe that you’re looking out for them, they’ll want to do business with you, even if your product isn’t the best.

When the Line Is Clear: You’re Selling Something Shady

If your products or services don’t actually provide the benefits that you claim they do, or your testimonials have been exaggerated, then you’re in a situation where the line is very clear: You should leave.

When any of the above criteria are met, you don’t simply “not believe” in what you’re selling, you’re actually being deceitful by selling it.

Related: What’s the difference between manipulation and deception?

Relying on deception to sell is problematic for two reasons. First, it can destroy your self-concept and have deleterious effects on your mental health. And second, it makes you worse at sales.

Protecting your mental health: how selling something you don’t believe in destroys your self concept

Most of us view ourselves as (generally) good people. When your behavior directly contradicts your beliefs, it creates a disconnect, which has to be reconciled. In psychology we call this cognitive dissonance: “situations in which our actions do not match our beliefs, creating a state of psychological and emotional discomfort.”

To resolve this emotional discomfort, we have to either change our behavior or change our beliefs, so that the two are aligned instead of in conflict.

Changing your behavior is the ideal outcome here (i.e., no longer selling the thing you don’t believe in). However, many people, especially if they feel financial pressure to stay in their job, unconsciously change their self-concept (their beliefs about themselves) instead. And this is where it gets dangerous.

Things that were once unthinkable are now permissible. This can lead to problems in your marriage, friendships, and in business if you are found out.

The danger with shifting your self-concept is that you risk becoming numb to your ethical boundaries. Once one ethical boundary violation becomes possible, other ones seem a lot easier. It’s like a “gateway drug” to making more bad decisions down the road that could get you into serious trouble.

I had a client who was one of those guys you associate with “old school” selling, where he’s a bit pushy and borders on annoying. He thought of everyone he encountered as a future potential sale. And he never—ever—believed in what he was selling.

In order to sell, he falsified testimonials, sold services whose benefits were made up, and pitched products that weren’t proven to work.

Because he’d thought of himself as a generally good person (but was deceiving others by selling things he didn’t actually believe in) he made that mental shift to “I’m the kind of person who does things like this” in order to justify the bad behavior.

He further justified his behavior by telling himself things like, “I need the money for my kids,” “I’m doing the right thing by my family,” “this is just how it is,” and “this is how you play the game.”

These are common justifications for when we know we are engaging in unethical or deceptive behaviors with which we disagree.

What happened next was what I call the “used car salesman” effect. It happens when you don’t believe in what you’re selling. You overcompensate by trying too hard to convince the prospect they need this product (or that they need you).

If you’ve ever been hit on by someone who’s trying too hard, you have an idea of what it feels like to be on the receiving end of this effect and how ineffective it is. When you try too hard to make a sale, the prospect picks up on your nervous energy and is actually turned off by you.

It pushes the prospect away instead of bringing them closer. (Closely related: The overly chipper effect.)

In the case with my former client, he burned a lot of bridges once people caught up with his schemes. And now he has a reputation of someone you don’t want to do business with.

Better to go find another product you actually believe in.