Whether you’re developing an injectable drug or a new-and-improved toothpaste, any product that could come in contact with human skin needs to be tested for toxicity before it has a chance of hitting the market.

Until recently, that meant you either had to test your product on live human beings or on animals. Thankfully, that second option is falling out of favor around the world—cosmetics testing on animals has already been banned in over 30 countries, as well as in California, Nevada, and Illinois.

What Genoskin offers is another way, previously considered impossible: A means of performing clinical tests on real human skin, without testing on actual humans.

“Normally, human tissue outside of your body falls apart within about 24 hours,” explains Eric Merle, Chief Commercial Officer of Genoskin. “We’ve developed technology to keep living tissue alive and functional for over a week.”

Functional is the key word, here. Genoskin’s technology doesn’t just slow the process of deterioration, it actually keeps ex vivo skin tissue as reactive as it would be on a person. “With our skin models, you can actually measure side effects of an injection such as immune reactions,” Merle told Nutshell.

In practical terms, this allows pharmaceutical, biotech, medical device, and consumer product companies to get clinical-level data on human skin before starting clinical testing. “One of our offerings is the only injectable platform outside of a human being,” Merle says. “So if you need human data on what an injection does, either you’re doing it in a real human being or on our models. There’s no other alternative today.”

And where does the raw material come from for this breakthrough technology? Tummy-tucks, mostly.

“The tissue we use comes from donations from the plastic surgery industry that would otherwise be discarded,” Merle says. “Most of the surgeries we source are from abdominoplasties. Patients provide consent to donate their discarded tissue for scientific research, there’s an ethical review board and testing for HIV and hepatitis, and in the end, someone sitting happily in a bathing suit has helped provide an efficient way of testing for human clinical data. It’s a win-win.” 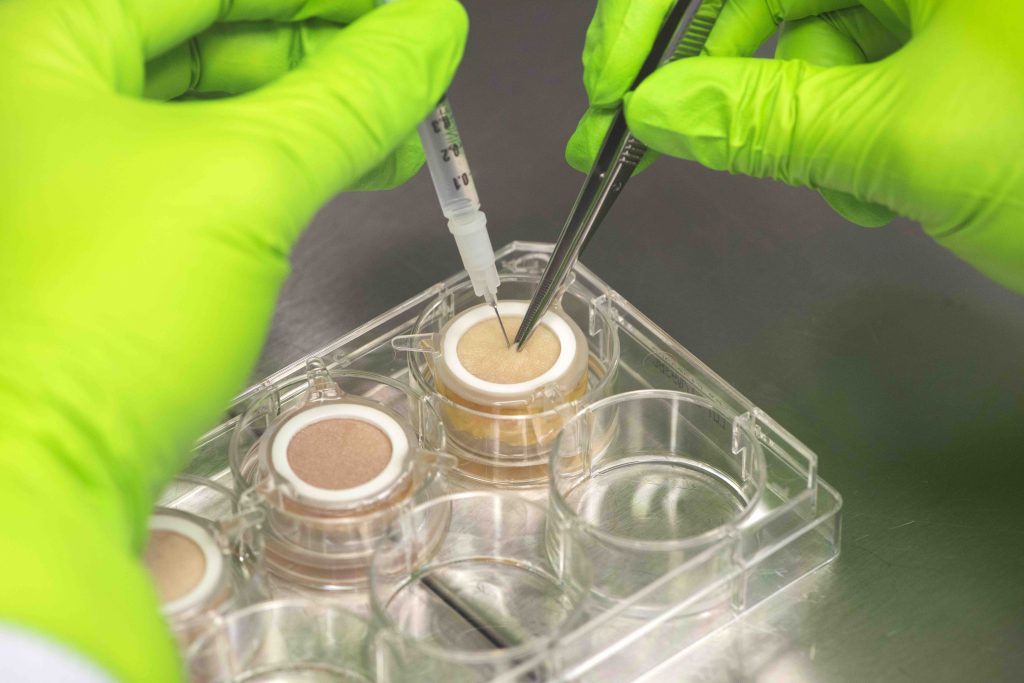 Founded in 2011 in Toulouse, France, Genoskin was born from research that Founder & CEO Pascal Descargues had conducted as a postdoctoral fellow at the French National Centre for Scientific Research. While Genoskin still operates a laboratory in France, they’ve since opened a headquarters in Salem, Massachusetts, in order to have a presence closer to the U.S. pharmaceuticals market.

Eric Merle joined the company in late 2018, eager to help in the growth of a potentially groundbreaking company. Armed with a Ph. D in molecular cell biology, Merle has spent his entire career commercializing new research tools, and was fascinated by the science behind Genoskin. “The kicker is that I’m from France, so working for a French company also made sense to me,” Merle said. “As an Americanized French person, I can understand the needs of both sides.”

Merle’s role as Genoskin’s Chief Commercial Officer bridges the gap between generating revenue and creating value for the company. “My day-to-day is everything from negotiating contracts with our customers, evaluating new product offerings, giving talks to spread our message, working with the sales team, and even doing my own sales calls,” Merle says.

What we do is very consultative and requires a lot of customer interaction. We’re providing something for which people didn’t have a solution before, so we have to understand what they’re trying to achieve.”

One thing Merle has done to improve Genoskin’s efficiency was introduce his team to Nutshell. “I first came across Nutshell seven or eight years ago when I was growing the sales group for another company, and I was really struck by how easy it was to use,” Merle said. “Other CRMs I’d seen had a lot of bells and whistles, but that quickly becomes cumbersome. I don’t want to have to do a training to learn a tool I need to do my own job.”

Unfortunately, the leadership at his former company decided to go with a different CRM solution, but when Merle arrived at Genoskin, he had more authority over which tools the sales team used. Immediately, he began advocating for Nutshell.

“At the time, [Genoskin] had two ways of tracking what they were doing from a commercial activity standpoint: Excel spreadsheets and a CRM called Teamleader that I wasn’t very impressed with,” Merle explained. “So I told the team, ‘Hey, this is what your current CRM offers, and this is what you can do today with Nutshell.’”

“We tested it for about a week, and it was actually easy to get everyone on board once they saw all the ways Nutshell could assist them with their work,” Merle continued. “Because as a salesperson, you need to be able to track where a deal is and remember when you have to send someone an email, and as your company grows, those things become harder and harder.”

Related: How to sell your own team on a new CRM

CRM can be a pain-point for a lot of salespeople as well as management, so it was important to have a tool that doesn’t create extra work. CRM shouldn’t be a burden.”

Merle knew that his implementation of Nutshell was going to be a success when his CEO started using it.

“The members of our sales organization in Europe, myself, and Pascal all have active Nutshell accounts,” Merle said. “I think it’s a testament to the quality of the tool that our CEO has fully adopted it, not just to look at the metrics on the dashboard, but to actually log his own activities. We’re hiring right now for sales positions in the U.S., and as we expand there, everyone will have a Nutshell license. It fits our needs now, and I see it still fitting our needs as we grow.”

One thing that has kept Merle loyal to Nutshell is the Support team’s steady guidance, and their constant willingness to find creative solutions to customer problems.

“Nutshell has been very responsive to our questions, whether those questions are coming from me or from the folks on my team in Europe,” Merle said. “Sometimes there might not be an immediate solution, but what I like is that the Support team always at least finds a workaround to what our need was. They’ll say, ‘Well, our tool doesn’t really do it that way, but here’s how you can get the same result, while still using Nutshell.’ That’s especially important since our team was transitioning from another tool, and people were used to using it a certain way and getting specific outcomes from it.”

Though the products they sell are complex and cutting-edge, the Genoskin team uses Nutshell just like any other B2B sales operation would—to track leads and communicate with buyers. Merle mentions the reporting suite among his favorite Nutshell features, as well as the recently added hot leads tool:

It’s literally just a box you click, but it’s a great little feature that we use all the time now. If there’s a conversation or important deal that we all want to keep our eyes on, hot leads makes it very easy to keep track of.”

Because of Nutshell’s ease of use, attentive support, time-saving features, and fast implementation, Merle finds himself playing the role of Nutshell evangelist in and out of the office. “I spread the good word every time I talk to a small company. I’m like, yeah, there are other good tools out there, but we’ve found our happiness with Nutshell.”

A glimpse into the future

The major goals for Genoskin’s future can be summed up in one word: growth. The company’s revenue has roughly doubled over the last year, and the team is looking to expand their geographic reach to another continent, which would open massive opportunities for the company.

“We work with an offering where logistics are key,” Merle says. “Our site in the U.S. is very close to a hospital, and we receive donated tissue within 24 hours of a surgery at most—usually it’s within 12 hours. We get it to our customers the next morning, and we can guarantee a viability window of seven days, but right now it takes an extra day to ship to Japan, Korea, and other places in Asia. So we’re currently looking at setting up a site somewhere else in South Asia, because we already have customers there and it would help us serve the region much better.”

Because Genoskin’s work offers a much-needed replacement for animal testing, they’re also rising to prominence as leaders and educators in the world of modern drug testing. “We were actually just invited by the FDA to come and train their reviewers on our technology because it caught their eye,” Merle says. “While it’s still common in the U.S. cosmetic industry to test an animal as a stand-in for human skin, the FDA knows that’s going away, so we’re going there in November to train about 150 of their reviewers.

That’s a much nicer email to receive from the FDA than, ‘You’re making false claims and we’ve got a problem.’ They asked us, ‘Hey, can you guys train us in what you do?’ It was a very pleasant email to get—and we captured it in Nutshell, by the way.”

Of course, Genoskin’s vision of growth extends far beyond simply selling more of the same products. Like all great technology companies, the initial concept is just the launchpad.

“Right now it’s just skin,” Merle said. “The truth is, our technology can work with all human tissues, so that should give you a little glimpse into our future.”